Premiere Review: The Suicide King from The Walking Dead

In the first half of Season 3 of AMC’s The Walking Dead, we witnessed the decline of our chief protagonist, Rick Grimes, into what appeared to be an ever more fleeting grasp on reality. 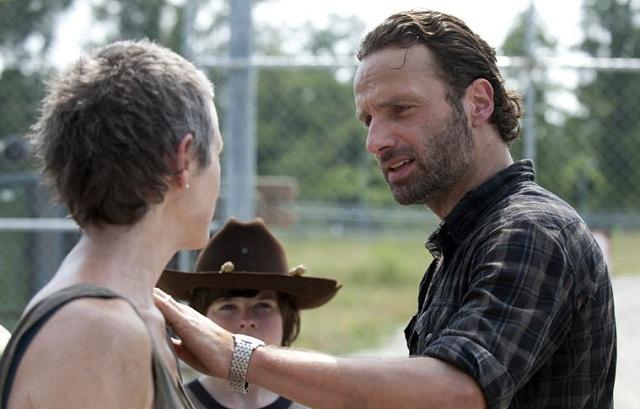 First it was his rage and his guilt both over his wife’s relationship with his friend Shane and his eventual killing of Shane. Then, when Lori died during child birth, Rick slipped over the edge. He began to hear imaginary phone calls from the dead.

But then, for a moment, it appeared his ghosts had abandoned him, that he would pull through. The old Rick emerged from that dark place and came back into the world, ready to bash in some zombie skulls and protect his loved ones.

In the midseason premiere, we find ourselves only moments after where we left off (hanging from a cliff.) Newly reunited brothers, Daryl and Merle Dixon, have been pitted against one another in a fight to the death, hemmed in by walkers and a bloodthirsty crowd.

Rick and Maggie show up guns blazing and the four of them—including Merle—escape in the confusion, leaving a very angry and deranged Governor behind. Andrea is also left behind, though I can’t quite ascertain what’s keeping her in Woodbury now that she knows the Governor is a cold-blooded maniac.

After the escape the Dixon brothers part ways with the fast-dwindling group; Daryl won’t come back to the prison if his brother isn’t welcome, and Merle is the furthest thing from welcome. As if his charming personality weren’t enough, his savage beating of Glenn and his eager willingness to aid the Governor in his sadism certainly was. Rick seems equally determined to rid himself of Michonne, a character so abysmal at even the most basic communication skills she may as well be from a foreign country with no grasp of the English language.

Safe and sound back at the prison, Rick and co. deliver the bad news: Oscar has been killed; Daryl has departed. The crew is as small as it’s ever been. Everyone is downcast. Glenn is traumatized and has no idea how to handle the sexual assault against Maggie. A wedge has grown between them.

They’re outgunned, outnumbered, and weary to the bone. Time for reinforcements, suggests Hershel.

The newcomers—Tyreese and his motley crew—are not necessarily trustworthy. While Tyreese and Sasha seem like good upstanding walker-killers, the other two–Ben and Allen—are already cooking up a coup. Little do they know, this makes them extremely expendable. As generic and unsympathetic as they are, I suspect they won’t last long, though I hope that Tyreese and Sasha become show regulars.

Rick isn’t fond of Hershel’s advice and refuses Tyreese and company flat-out. Hershel begins to talk him into the idea when a vision appears: Lori, her face shrouded in shadows, in her wedding dress. She’s staring ghoulishly down at the proceedings. Rick begins to mutter “no” over and over again.

Apparently the make-believe phone calls were not the full extent of Rick’s mental breakdown. He begins shouting, pacing, waving a gun about. ”What do you want from me?” he screams. “I can’t help you! Get out!”

The newcomers quickly flee, while the old-timers look on in shock and horror. Hershel, who knew about the phone calls, is worried but helpless.

For my part, I think a healthy dose of sleep is in order for our ex-sheriff. I’m not sure if Rick has slept in days and his mental state could very well be crumbling due to his exhaustion and the overwhelming stress of survival, grief, and constant death.

The baby haunts him as well. It was only moments between his reunion with his youngest child and his vision. His guilt and sorrow haunts him, and the baby is a cruel reminder.

All told, I’m not sure this was the strongest episode for a midseason premiere, though the end was intense. It had a transitional feel to it with Daryl’s departure and the lull in action. And so we are left not knowing where the wind is blowing.

Andrea is upset with the Governor but shows no signs of leaving; quite the contrary. Things happened in the episode, but not enough to get the ball rolling.

Next post: Escort Service in new century is changing and coming

Previous post: From A Hooker to A New York Escort Owner